Genuine reclaimed timber boards produce stunning and highly individual floors which can enhance any traditional or period restoration. By using reclaimed wood, with its original patina and worn effect, it can add character and appeal to newer properties and works well with contemporary design projects.

Reclaimed wood flooring can be any age. The most frequently used is Victorian which is also the most popular but they can be from the rarer Edwardian or Georgian periods. These boards are from a range of species including oak, elm, walnut, chestnut or antique French oak. Strip flooring using maple or beech are also a popular choice.

By using reclaimed wood you are increasing the range of species available. Many of these woods have become unsustainable and are no longer available as new solid or engineered wooden flooring. The most common reclaimed boards are pine which were generally made from slow grown trees and therefore far more harder wearing than modern pine. Rarer options available are the original wide boards from the Georgian period.

Reclaimed floorboards are easy to fit and can be glued down to solid sub-floors. Some reclaimed woods are made into engineered boards, making them particularly stable. These engineered boards are suitable for under floor heating.

The different textures, final colour and finishes are down to individual tastes. Reclaimed flooring has been shaped by the passage of time rather than the hand of man with the original patina, such as surface texture, undulation and time worn look, valued for the character appeal. 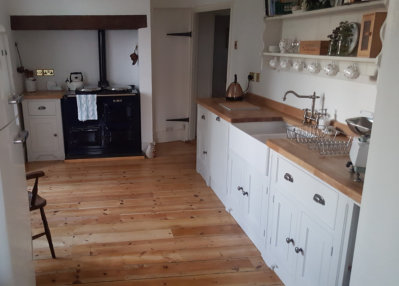 An example of reclaimed pine in a kitchen 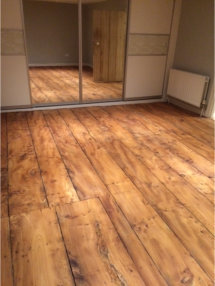